Having completed the restoration of Bosmere Lock, the decision was made in 1997 to head downstream to Creeting Lock. Unfortunately this project would prove to be significantly more time consuming because of the peculiarities of this lock.

First, it was a Grade II listed structure which meant they could not simply knock down the bits that were bad and then rebuild as they did at Bosmere. Second there was no existing by-wash that they could use to divert the river flow as it had been lost by ballast extraction in the adjacent field. They decided to try and use the old mill race but this had been in-filled with tarmac and rubble.

An attempt was made to tunnel under the roadway that led to the lock and remove the infill but they discovered two high voltage cables had been buried along the roadway which had to be lifted out of the way until the excavations were complete. This by wash was finally completed which allowed the existing stop planks to be re-installed at the head of the lock to make them water tight.

During 1999 Anglia Television ran a magazine programme called ‘Take it On’. This particular one had features on waterways in the Anglia region and was transmitted on Sunday 4th July 1999. It had a 6 minute slot on the work of the Ipswich Branch of the Inland Waterways Association (IWA). It featured their work at Creeting Lock and contained interviews with some of the stalwarts of the branch, in particular Chard Wadley the branch Chairman, Peter Bowers, John Finch and Don Brazinski. Unfortunately Don is no longer with us but the others are still working hard with the River Gipping Trust.

When they were finally able to start work in the lock and remove about a metre of silt and stone, some more serious problems were uncovered. There was a large void under the breast wall of the top cill and chamber wall. This took 8 mtr³ of concrete to fill. An earlier survey showed that the lock chamber walls were unstable and would require stabilising. Ground anchors would need to be installed through the walls to sheet piles some 5m behind the walls. One other small problem was the need for major repairs to the accommodation bridge over the tail of the lock. The arches had suffered frost damage and the spandrel walls and parapet were so dangerous that they had been completely demolished and rebuilt. They had to obtain listed building consent for those repairs. 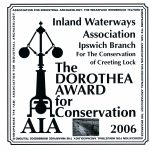 Finally in 2004 the restoration work was completed, again with significant help from the Waterways Recovery Group. The branch decided to apply to the The Association for Industrial Archaeology (AIA) for the Dorothea Award for Conservation. Go to the AIA web site to find out more about the Award but briefly the AIA only make one award per year and in 2006 Ipswich Branch received it along with a cheque for £500. That sounds relatively simple but the application paperwork took ages to complete. You can view the entire set of papers for the Dorothea Award application.

This is the presentation given to the AIA when the application was made for the Dorothea Award. It is in video format and will run through the slides one at a time and display each one for 6 seconds. You can pause the video at any time or run it in full screen mode.

Restoration work at Creeting Lock in 2001

An Anglia TV programme made in 2001 and presented by Sophie Allisstone. It shows restoration work by IWA Ipswich Branch and the Waterways Recovery Group (WRG) at Creeting Lock. Their are also clips of other locks on the river. The video gives details about WRG and how you can join in. The prices are a bit out of date – the current cost of a weeks camp is £70 – and of course Covid 19 has stopped all travel but hopefully they will start again soon.