Old postcards of the River Gipping and its surroundings

These are the final 37 postcards from John Jarman’s collection. Most of the locations are obvious from the titles but there is one that needs further explanation. To try and do something about the continual flooding in the Handford area of Ipswich it was decided to build a new weir that was designed to give a greater area for the water to flow over than a simple straight line. They created a semi circular weir called a “tumbling bay”. This in turn led down to a new bridge – the Seven Arch Bridge. 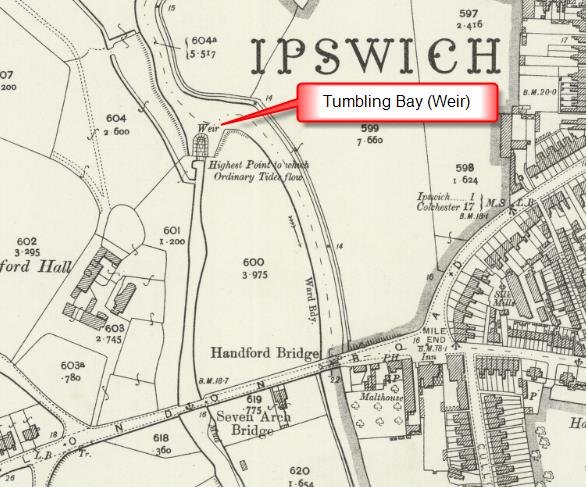 The map shows the location of the two structures but neither of them really solved the problem of flooding. Both structures have been removed – the weir by a large gate in the river between Sainsburys car park and Yarmouth Road and the 7 Arch Bridge by the new London Road bridge.

There are also 6 postcards at the end of the collection that we have found it impossible to allocate to a location. Please write to us if you are able to offer any suggestions for these cards.

We have just added two more cards on this page. They show Ship Lane Bridge in Bramford and are described as “CdV”. This stand for “carte-de-visite“, literally ‘”visiting card”  This article from the Ephemera Society explains what they were.