Old Postcards of the River Gipping and its surroundings

John Jarman has a fine collection of old postcards and he has given permission for us to display them on our web site.

This web page contains the first selection of 32 cards. To give an idea of the location of most of these cards, here are two early 20th century OS maps of Ipswich. The first highlights what is now known as the Alderman Canal. This is something of a misnomer as the waterway was just an extension of the River Gipping. It used to circle through the town and then re-join the Orwell further downstream. At some time, where the waterway meets Alderman Road it was put into a culvert so it appears to stop just there. It thus gained the name Alderman Canal. 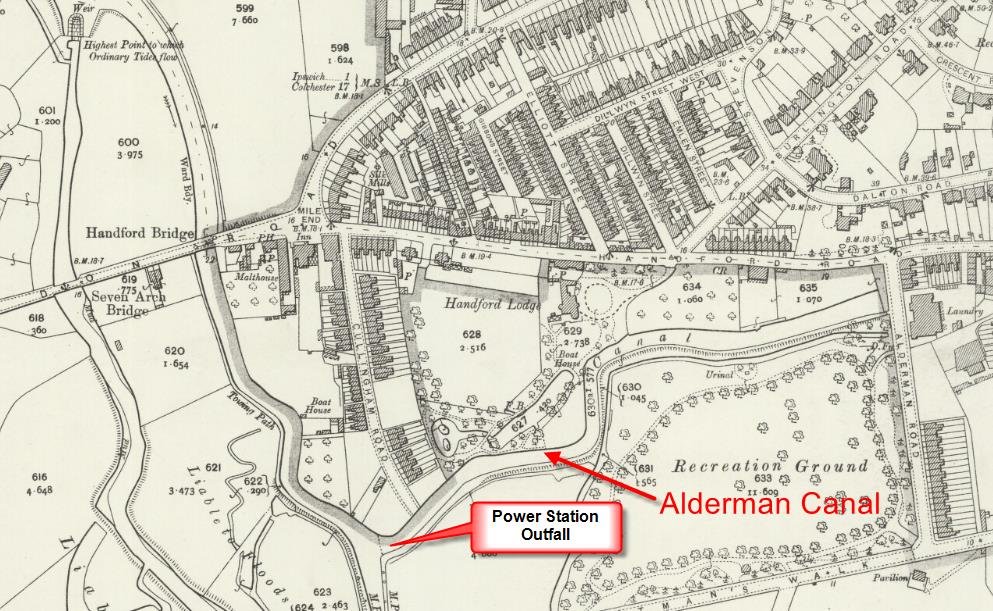 Also shown on the map is the outfall for what used to be Constantine Road Power Station. The cooling water for the power station was drawn from the Gipping and then pumped out at the start of the canal. This water was several degrees warmer than the surrounding stream and thus was a draw for youngsters swimming. It also helped local fisherman and was very popular with rowers. You can see from the number of cards that it was also a popular spot for photographers and artists.

The second map shows Boss Hall, the railway viaduct and the tannery. Boss Hall is now an industrial estate but the viaduct is still there. In the postcards marked as Boss Hall you can see either Boss Hall, the railway or both in the background. This part of the River Gipping was also a favourite spot for photographers as was the part of the river that fronted the tannery in Bramford Road.